Who are your targeted audiences?

In the previous post, I shared the behavior of social media users in 2021.

Plus my personal experience that I start a Twitter account in January. Now we are stepping into March.

I have realized some fact that the Twitter users mostly are men. Just looking at my accounts that I follow more than half of them are men (even though I chose to follow the content, not about the gender.) Well, I then make a little more observation.

I read through the comments from the post I’m interested in, most of them are men (more than half).

Moreover, I stalked my following accounts to see why they follow I found that more than half are men.

From my observation alone, the Twitter users are men more than 50% (that I saw).

That’s why my feed and comments are full of men active users. And it’s not easy to find female users to follow as well. First, I thought it’s probably because of the bubble that I have created (the algorithm). Because the account I followed mostly are men, so I naturally see that men are more active on Twitter.

I have written the post once that I wanted to use Twitter to grow my content and pave my way in social media. But I ignored the fact that this might not the right place for me. At that time I thought only of that as a writing career. Twitter would be the right place. Because the writing community is big on Twitter (#WritingCommunity).

But today I dug a bit deeper to learn about the fact if my hypothesis is true.

First, I need to clarify that I am writing (mostly) for women. So my target audience is definitely not on Twitter when I see this info (from Statista, January 2021)

Wow, I was so ignorant in the first place that I did not see the fact that now I am diving into the men’s world (on Twitter). Only 31.5% of Twitter users are female.

To be honest, I do not think of it yet how would I do next. But sure I will have the answer (maybe in the next post, I’ll come back and share with you.)

Because I want to support women and empower women as always.

So my next question is where are those women?

Which platforms are women using?

Where else can we find more women?

Women are using these platforms more (than men) on:

So I found this infographic (2013) below. It’s quite old but this could give you a quick idea of where to find more women audiences. 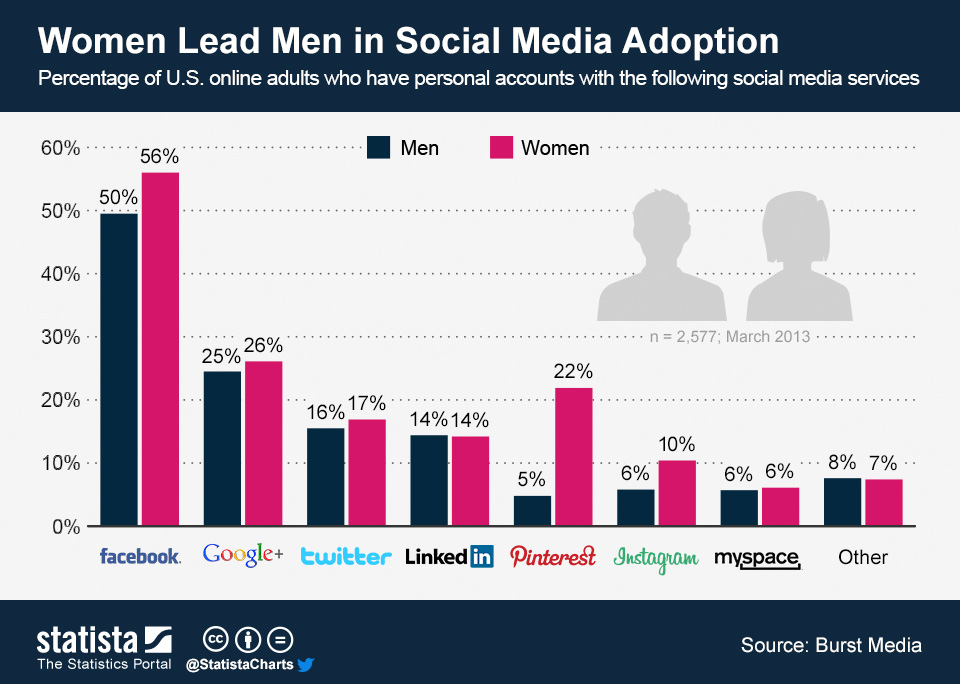 You will find more infographics at Statista

Pinterest is the most famous among women. This is correlated to the research by Karatsoli, M. and Nathanail, E., 2020) that women are engaged with pictures more than just text.

If you never used Pinterest, I can tell you that the platform leads by picture, like Instagram but the content is not just for personal stories. But people do business on there and they are making a huge purchase through this platform.

So if you want to communicate and connect with more women. You might need to consider creating a Pinterest business account. That would be the best option at this moment and in combination with the following order mentioned above.

You can also find more insight information following the resources below.

View all posts by Sue Bunthot

One Reply to “Are You Working With Women: Who Do You Actually Want To Communicate With?”